So many of you know I HATE MOBAS I mean, I would prefer castration over playing any MOBA.
Yet for some reason I absolutely LOVE Heroes of the Storm.

And here is why:

Hero Interaction via humor as well as Positive Reinforcement and Reprimand:

Basically, this is where you get told, “Good Heal” or “Heal Me” or humorous interactions like, “Wow you are ugly”

You really truly feel like you are getting each other’s backs in this game. This can be from a simple thing like a heal or takedown or it can be from changing up your strat to further you teams progress. You could be killing camps and your team could be pushing and together you make the win happen.

Meta the way YOU want and NEED:

The level of learning and meta is AMAZINGLY complex. But at the same time, you can stick with a build you know or switch it up depending on the match. Plus your attack lane or who you attack or defend can also be part of the META.

One thing I hated in MOBAS was having to stop battling and click through menus like some counter strike mission to buy consumables and items. Instead you work as a team to level up and you all benefit from playing well with each other, not playing well at the menu game.
As your character levels up in Heroes of the Storm, you’re asked to choose between talents that modify their abilities or boost their stats. [/I]

You can upgrade your character instantly anywhere on the battlefield. There’s also no need to keep track of currency or any inventory. It’s a very convenient system that still gives players a lot of options for customizing their character.

It is a ton of fun to play your favorite heroes from the Blizzard games you love.

Objectives Are King
Heroes of the Storm has the same core challenge as other MOBAs: players push through lanes of defensive towers and A.I. enemies before finally laying waste to the enemy’s base. However, each map in Heroes has secondary objectives that can completely turn the tide. For example, the pirate ship at the center of Blackheart’s Bay will fire on your opponent’s fortifications if you turn in enough coins.

Each map is a very different experience requiring its own strategies. These objectives reinforce the importance of teamwork. It’s nearly impossible for one player to accomplish them on their own, especially if the other team is pursuing them as well.

The never-ending battle between the forces of heaven and hell can get pretty messy at times, I’ve learned.

“Battlefield of Eternity,” is modeled after Diablo III specifically, and the map definitely wears its inspiration on its sleeve. That’s to say: it gets pretty insane sometimes.

BoE is a large map by HOTS standards, but only has two lanes despite its size. That’s because the whole center of the map is taken up by two large creatures called “Immortals” who appear at periodic intervals to start attacking one another. There’s a blue one on one side:

…and then a red one on the other:

Whenever the immortals pop up, you and the rest of your team are supposed to stop whatever it is you’re all doing, rush into the center of the map, and either defend your immortal or hack away at the enemy’s. Once one of the immortals has been taken down to half of his original health, the two do a snazzy Dragon Ball Z style slow-motion attack in the center of their makeshift arena:

…before pivoting to the other set of circles on the edge of the arena, just to keep everyone else on their feet I’m sure.

Similar to some of the other Heroes of the Storm maps, your goal in completing this objective is to try and earn your team a powerful ally who will help all five of you press the attack against the enemy base. Once one of the immortals has been killed, the surviving one leaves the map’s central fighting pit and starts attacking the closest enemy defenses in one of the two lanes:

The immortal also gets a shield after his fight is over—the precise power of which is determined by how much health he had left before the other immortal was killed. So…yeah, this guy can definitely punch a large hole in a base if one team does a much better job taking out the opposing immortal whenever they appear.

One of Heroes of the Storm’s defining characteristics—especially in comparison to other big MOBAs like League of Legends and Dota 2—is the fact that Blizzard’s game has a diverse array of themed maps like this new one. Each of the battlegrounds has its own distinct flavor that nudges you to play a certain way.

The main thing I have noticed so far, though, is that the games I’ve played there have all been very, very crazy. Team fights break out very often, and don’t seem to stay in one place once they’ve gotten started. They bounce back and forth between different locations at a rapid clip.

It makes perfect sense on one level that battles on this map would be particularly chaotic. I mean, the objective and the way it’s set up in the level means that Eternal Conflict has basically created a sinkhole right in the center of the map—a tactical point large enough for players to move around in, but small enough to keep the ebb and flow of battle focused in one discrete area.

Oh, and one more thing that Diablo fans will love about this map. Whenever one of the teams’ cores is destroyed, it drops a ton of randomized loot:

Sweet, sweet loot. If only I could use it for something in this game. 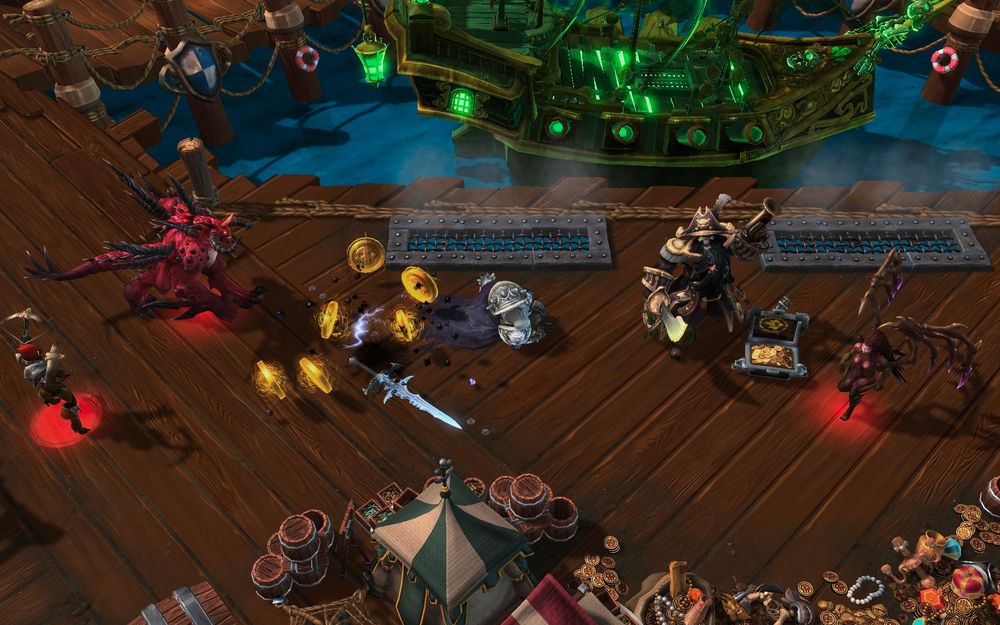 The game always has me laughing. I like to laugh.

Beautiful, simplistic, but complex, and exciting.

The top down approach is a big thing I love, reminds me of UO but with the colors and vibrancy of World of Warcraft. This makes me very happy. It has so much to it, yet allows you to learn and not feel like an idiot while you do.

So what are your thoughts? Do you enjoy HoTS, do you like other MOBAS more? Leave your comments below!

This free-to-play online team brawler assembles a diverse cast of characters from Blizzard’s far-flung realms of science fiction and fantasy, including the Warcraft, StarCraft, and Diablo universes, and challenges them to compete in epic, adrenaline-charged battles. Heroes of the Storm solicits players to customize heroes to suit their style and then team up with friends for some all-out mayhem. The game features an array of gameplay modes for players of every skill level, including Cooperative, in which players team up against computer-controlled opponents, and Quick Match, an accessible way to jump in and play versus others. Experienced players can also join forces against other teams of players in highly competitive, draft-style ranked play. With it's easy to pickup approach and rewarding approach to doing well via team perks and flavor voice overs, you constantly feel immersed in the battle, not thinking about your hot bars, but watching the battle in front of you!
8.5

Maingear Gaming Chair Review: Yes it can “Do This”! The Vorze: My Hands “Off” Experience – NSFW